Back when gambling was prohibited in South Africa, Sun City drew visitors for its casinos, swimming pools, luxury hotels, extravaganzas, beauty pageants, music shows and rock concerts. 40-years later, Sun City is as known for its casino entertainment as it is for its diverse activity offering and the sporting events it hosts, like major golf tournaments, mountain bike races, trail runs and open-water swimming events. These events, together with the many adventure activities on offer,…

Back when gambling was prohibited in South Africa, Sun City drew visitors for its casinos, swimming pools, luxury hotels, extravaganzas, beauty pageants, music shows and rock concerts. 40-years later, Sun City is as known for its casino entertainment as it is for its diverse activity offering and the sporting events it hosts, like major golf tournaments, mountain bike races, trail runs and open-water swimming events. These events, together with the many adventure activities on offer, its Lost City theme park and its close proximity to the Pilanesberg National Park, make Sun City as current and exciting today as it was when it first opened its doors in 1979.

There are watersports at Waterworld, a zipline at the Valley of the Waves, a permanent maze that looks like an archaeological ruin, target shooting and other adrenaline-infused activities at Adrenaline Extreme, and an array of adventure activities at the Mankwe Gametrackers Outdoor Adventure Centre .

By car, Sun City is less than three hours from Johannesburg, two hours and 20 minutes from Pretoria and less than an hour from Rustenburg. The Pilanesberg International Airport, which is 15 minutes from the resort, welcomes regular domestic flights from Johannesburg (35-minute duration) and Cape Town (two-hour duration). Sun City is located in South Africa's North West Province.

Sun City Action Shooting. You'll feel like a character in Mission Impossible when you sign up for AirSoft - Call of Duty at Sun City's Adrenaline Extreme. You get 200 shots to clear a 'house' by shooting at targets using an Airsoft gun. This is a tactical shooting challenge with...
Read more

Visit Adrenaline Extreme at Sun City and challenge your driving skills with our Drift Trikes experience. The drift trike is a unique three-wheeled vehicle that is designed to drift around corners. Our drift trikes are motorised, similar to a go-cart. They run on a tar track where clients...
Read more

Hot-Air Ballooning in Sun City. Before the sun rises, hot air balloons take to the sky, soaring above the hotels, swimming pools and theme parks of Sun City and the wilderness of the Pilanesberg National Park. In the early morning,  the air is stable and unaffected by the thermals of a warm day....
Read more

Hovercraft in Sun City. Take a breather from the hustle and bustle of Pretoria and Johannesburg by visiting Sun City. Situated near Rustenburg in the North West province, and virtually a stone’s throw from Pilanesberg National Park, Sun City is a one-stop playground with something for...
Read more

Sun City Jetovator. This is a not-to-be-missed ride at Sun City's Waterworld. The Jetovator is a water-propelled flying bike that is incredibly easy to learn to operate. A special hose connects to the bike with enough force is exerted by the water jets to suspend you as much as 10 metres above the...
Read more Maze at Sun City. A walking maze is a large-scale, three-dimensional version of those pen-and-paper puzzles that captivated us as children. The maze walls are higher than head height and the complex path network may have multiple entrances and exits as well as dead ends. When walking a maze,...
Read more

Parasailing at Sun City. At Sun City's Waterworld, parasailing is one of many water-based activities offered on the man-made lake. Popular with visitors to this luxury resort, parasailing is safe and fun. A specially designed canopy that looks like a parachute is towed behind a speed boat. You are...
Read more

Quad Biking in Sun City. Quad bikes are four-wheeled All Terrain Vehicles (ATVs) with better stability than a motorbike and the performance of a tractor able to climb over even the roughest terrain. Whether riding on trails or conquering obstacles, quad biking is superb fun. At the Sun City resort,...
Read more 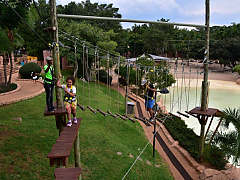 Rising like a fantasy wonderland from the bush covered foothills of the Pilanesberg is Sun City with its absolute plethora of fun thrill seeking activities. One of the latest offerings is an aerial adventure that will challenge and entertain both young and old, risk takers and the extremely safety conscious...
Read more 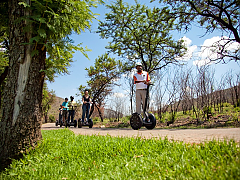 Segway Tours in Sun City. At Sun City, guided Segway tours showcase both the glitz and glamour of this luxury resort and the immaculate grounds and wilds of the expansive property. The Golf Course Glide route meanders through the Gary Player golf courses and offers views of the gardens, lakes and fairways...
Read more

Sun City is the ultimate teambuilding venue. Apart from a choice of excellent accommodation for all group sizes, the activities and facilities available for optimal teambuilding are so considerable that the first big task of any teambuilding facilitator will be choosing which ones to incorporate. These...
Read more 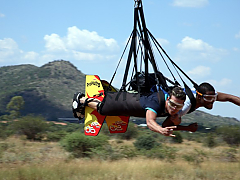