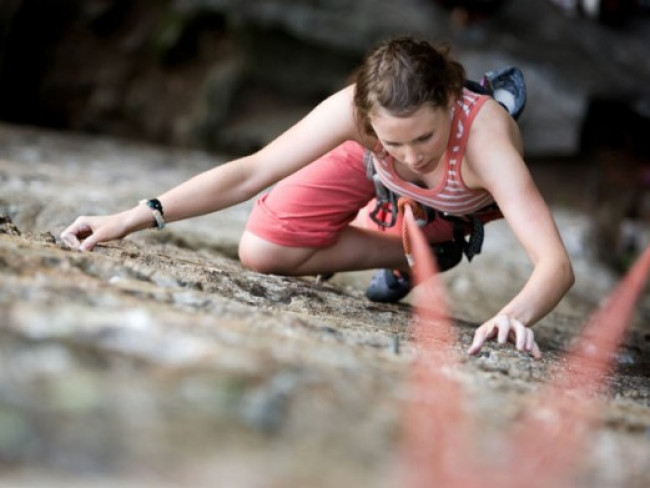 Unforgiven
(18) 15m – 9 draws
This route is approx. 20m to the left of the chain ascend and on the far right of the 50m abseil crag (facing the crag). The first section of the climb requires a tricky lay-back. The second crux move is to get off the large ledge, 2/3 up on the route and then the last crux move is to reach a loose chock stone at the second-last bolt. Climbers and spectators be weary, the chock stone seems a bit dodgy…

Even Cowgirls get the Blues
(17) 15m – 9 draws
The route is situated about 10m to the right of the dripping waterfall, below ‘Ryk se Klip’. The climb offers a nice variety of moves, with a couple of reachy grips that might make it extra challenging for shorter climbers.

Once Upon a Time in the West
(20) 20m – 12 draws
This challenging route is situated about 100m to the left of the dripping waterfall, below ‘Ryk se Klip’. The climb offers a nice variety of moves with a couple of thin sections. To make the climb even more challenging one can climb only the flat face at the start.

A Man Called Horse
(14/15) 30m – 12 draws
This route will be sheer enjoyment for first-time climbers, as well as experienced climbers, especially after the abseil with the adrenaline still pumping through your veins. It starts approx. 5m to the left of the dripping waterfall, below the ‘Ryk se Klip’ abseil up the left corner of the gully. The start (first 7m) might be a bit wet and slippery up to a big tree. From there, it’s just fantastic climbing between two spectacular rock faces all the way to the top. *A top-rope can be rigged from the top.

Ballad of a Lonely Mare
(16/17) 30m – 12 draws
This route shares it’s first 3 bolts with “A man called horse” and then leads up the right corner of the gully above the dripping waterfall. Climb to the bottom of the chimney. Follow the chimney to the top at ‘Ryk se Klip’. This is one of the favourites at Buffalo Gorge and offers some good sustained climbing all the way to the top. *A top-rope can be rigged from the top.

Billy the Kid
(12) 15m – (Only top-rope anchors at top)
The route is ideal for school groups, first-time climbers and families. It is not situated at the same crag as the other climbs, but at the 15m abseil crag (Buffelskloof Berg) about a 500m walk from the campsite.

*Qualified That’s Me Adventures Rock Climbing Guides can be organised to facilitate climbing.
*For all the Traditional climbers out there, there is a lot of potential for new routes at Buffalo Gorge. Come and attempt some first ascents!

Also by this operator