Bungy Jumping is an exhilarating adventure activity that has taken the world by storm – and where better than South Africa to test how much guts you really have! Home to the highest bungy jump in the world, a Bloukrans River Bungy jump will really test your limits!

Bungee jumping was not always a pastime for the young and the young at heart. Once it was a terrifying tribal ritual that young men had to undergo to be considered… 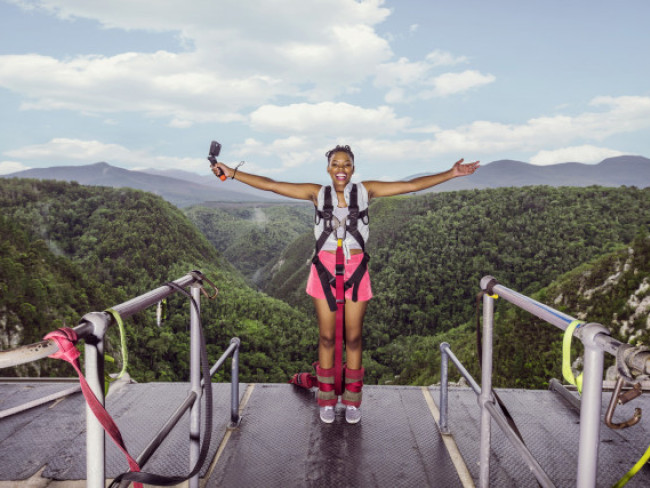 Bungy Jumping is an exhilarating adventure activity that has taken the world by storm – and where better than South Africa to test how much guts you really have! Home to the highest bungy jump in the world, a Bloukrans River Bungy jump will really test your limits!

Bungee jumping was not always a pastime for the young and the young at heart. Once it was a terrifying tribal ritual that young men had to undergo to be considered men by their tribe. Luckily, young men are no longer tied to green vines and leaping of bamboo towers.

Our operators are professional and work to strict safety regulations.  This means that you can still be mad without fearing for your life!

If you are in the picture perfect Garden Route, a stop at the ever popular Bloukrans Bungee Jump is a must. A whopping 216 meters awaits, but due to the extreme height, the traditional ankle harness is replaced with a body harness – so you’ll feel safe and snug as you race towards the river below!

Alternatively you could head out to the jump at Krugersdorp Mogale City, which operates from the 50m high Kings Kloof Bridge. Here you can test the limits of your sense of adventure by combining your jump with excursions on a 320m foefie slide, a bridge swing and a full-throttle adventure circuit. Orlando Towers, on the other hand, affords the visitor a unique view of Soweto (South Africa’s largest and most culturally influential informal settlement) as you hold on for dear life whilst swinging between two erstwhile cooling towers.

So, whether you prefer forest scenery or the unique charm of an urban vista, South Africa has the jumping location for you. Simply peruse our selection of activity providers and find the bungee jump that best suits your requirements.

If you have ever wanted to bungee jump, Bloukrans is the ultimate destination for you. Just 40km outside of Plettenberg Bay on the Garden Route, and situated at the Tsitsikamma Forest Village Market, you will find the ultimate thrill in adrenalin-pumping adventures. Bunjy Bloukrans is the highest bungee jump site from a bridge in the world, and is recognised by the Guinness World Records for this fact. The Bloukrans Bridge is also the highest single span arch bridge in the world – read the story behind this as you wait in line for your turn to jump.

People choose to bungee Bloukrans for a number of reasons. Some think that it may help to cure their fear of heights, but most people do it for the thrill of it and to say that they have jumped the world’s highest bungee jump. Gone are the primitive bungee days when one end of a piece of rope was tied to the bridge and the other to your ankles, and you jumped and hoped for the best. These days you are strapped into and secured in a full body harness for maximum safety and to lessen the impact when the rope reaches its limit and jerks you back up into the air. Bloukrans uses pendulum bungee technology to ensure the smoothest, most comfortable bungee jump possible.

After being strapped into the harness you will be led along a specially designed catwalk that is 216m in length, and suspended beneath the road surface. This leads to the top of the arch, 216m above the Bloukrans River. Upon reaching this point you will be given your final instructions by staff who have the highest levels of experience. They will then start the countdown as you prepare to make your leap and bungee jump Bloukrans.

So if you’re travelling along the Garden Route and want to get even closer to the stunning scenery, this is one thrill that you cannot miss out on. Take a deep breath and prepare to scream as you join the esteemed ranks of those who have jumped before you. Bungee Bloukrans and you’ve bungeed the highest bridge bungee jump in the world. 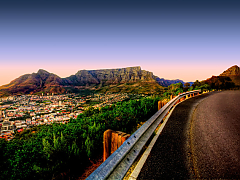 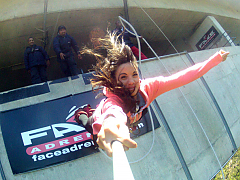 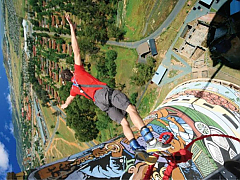 Soweto Towers - Bungee Jumping in Johannesburg, Gauteng. The iconic Soweto Towers are the anti-hero of adventure locations. These two decommissioned cooling towers must be the coolest in the world a...
Read more Enquire now