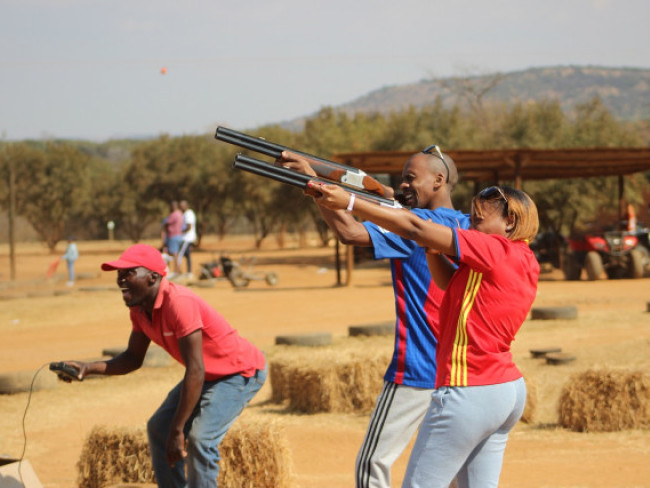 This is a great relaxing and fun activity that doesn’t require any special fitness or athletic ability, and is a unique experience that few people have had the opportunity to enjoy.

As you set your sights to the sky, a disk is released from a launcher. Participants then test their shooting skills by firing a modified shotguns high tech infrared laser at the target. A score board generates the shotgun “bang” whenever the trigger is pulled. If on target, the sound of a cracking disk is reproduced over the score board which signals your success. In each round 5 people can shoot at the same target launched from a number of different positions at various speeds and angles. Each participant gets 40 shots at 20 clays. If the clay target is hit , the player is awarded two points for their first successful shot and one point for the second.

This is the very best in interactive activities and highly recommended for groups and teams as well as individual bookings. Whether you are young or old, a beginner or advanced, you can train to compete with the best. This is a fun and safe laser twist on clay pigeon shooting. Throughout the activity, team members are constantly rotating and having a go. Everyone gets to cheer and the looks on people’s faces when they make a direct hit are priceless. Victory relies on skill, a little bit of luck and heaps of fun.