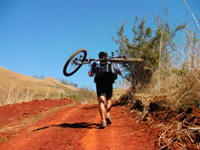 Recently our very own Johan Radcliffe teamed up with Darron Raw of Swazi Trails for the South African adventure holiday of a lifetime. These two intrepid explorers boldly set off on a twelve day tour of Swaziland. But they had no motorised transport, no luxury accommodation and exemplary cuisine at the end of the day, and no flushing toilets or hot showers. With just their feet and two trusty mountain bikes, they set off to circumnavigate the 550km border of Swaziland.

The day before departure heralded Johan’s 40th birthday, which gave these two the perfect reason to carbo-load on chocolate cake, cheeses and other delights. On the 11 August 2009, the men set off on their bicycles and Karen Vickers followed as a backup member (in a luxury, climate-controlled 4x4 that was stocked with heavier equipment and supplies). The Swaziland holiday started at the Ngwenya/Oshoek border post and they got off to a good start through the Hhohho district and into Shilseweni, passing Makwane Peak along the way. They camped on a dirt track under the starry sky and hoped that no traffic would come along in the night. 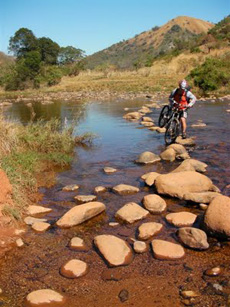 The next morning saw Johan awake at 4:00, but general consensus was to return to sleep. Later they were woken by a crowd of giggling children on their daily 10km walk to school. A cup of coffee later and the men were on their way. They peddled through mountain forest and waded through rivers, met up with foresters, intercepted a hunting party and were accompanied for the final part of the day by a local village girl. After covering an astounding 36.5km, the men turned in for the night. 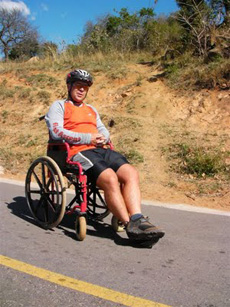 The following days were much the same what with plenty of cycling, hiking, wading through rivers, and although a knee injury nearly caused them to abandon their mission, adrenalin pushed them onward. Through arguing with border post officials, losing maps and directions, and cycling in the dark to make up for lost time (and covering an impressive 72km in one day), they finally reached their last day. Instead of a gentle walk as originally planned, they raced along on their mountain bikes, eager to finish the final stretch. Racing along freshly tarred and gravel roads, crossing streams and peddling up and down hills like mad, they finally made it to the start/finish line where they danced a celebratory jig with the Senior Immigration Supervisor. Although a bittersweet moment, Johan and Darron where happy that they had found what they had been looking for – a hassle-free Africa where one can connect with people, slow down and enjoy the scenery.

If you are interested in partaking of a similar Swaziland holiday or an alternative South African adventure holiday contact Dirty Boots for more information.