Overberg Adventures and Fun Things To Do. The Overberg region stretches from the Hottentots-Holland Mountains in the west to the Breede River in the east. To the north, the Riviersonderend Mountains form the boundary to the little Karoo and to the south the Atlantic and Indian Ocean meet at Cape Agulhas, the southernmost point of Africa.

When you spot the first Blue Crane you know that you have arrived in the Overberg. During spring and summer, this majestic rather-unreal-looking… 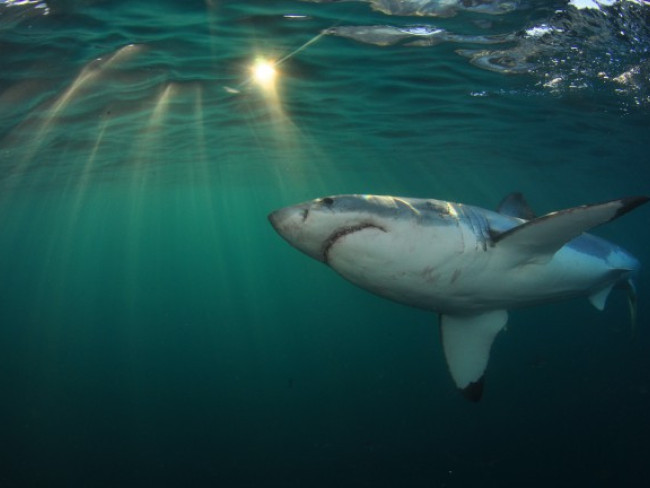 Overberg Adventures and Fun Things To Do. The Overberg region stretches from the Hottentots-Holland Mountains in the west to the Breede River in the east. To the north, the Riviersonderend Mountains form the boundary to the little Karoo and to the south the Atlantic and Indian Ocean meet at Cape Agulhas, the southernmost point of Africa.

When you spot the first Blue Crane you know that you have arrived in the Overberg. During spring and summer, this majestic rather-unreal-looking large bird, that also happens to be South Africa’s national bird, struts around the rolling farm lands; the bread basket of South Africa. Farmers here owe their success to the life-giving waters of the Breede River.

A river rafting adventure on the Breede River is time well spent. Glide down this wide, tranquil body of water while you gaze at the bird life above. Race along sections with rapids and join in the fun of games and activities on the river and in the evenings at the picturesque camps.

The Elgin Valley, renowned for its apples and pears, offers a range of diverse activities. Go mountain biking and horseback riding through the rugged mountains, tackle a 4x4 trail or hike through valleys with picturesque orchards.

The town of Hermanus lies along Walker Bay. In the early spring, the blue sea is punctuated with V-shaped sprays and the sound of great breaths being expelled from pairs of giant lungs. And should you miss it the first time; the whale crier will soon alert you to the presence of southern right whales in the bay.

Hermanus is considered one of the best whale watching destinations in the world. Here, southern right whales lobtail (point tails up in the air), spyhop (look above the water) and, at times, throw their colossal bodies out of the water and crash into the sea again with a resounding thud, sending waves of spray high into the air.

Further south is the tiny fishing village of Gansbaai, a place synonymous with great white sharks. Thanks to a rich sea life and thriving colonies of cape fur seals, great white sharks thrive here and Gansbaai is considered the best shark cage diving destination in the world. A shark cage diving adventure involves a trip to a shallow channel known as Shark Alley. No diving experience is needed for this opportunity to stare one of the ocean’s apex predators in the eye. 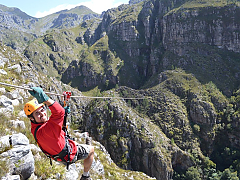 Aerial Cable Trail in Overberg. They take you up into the tree canopy and see you whizzing along from one secure platform to another on the steel-cabled zip lines.
Operator Contact List 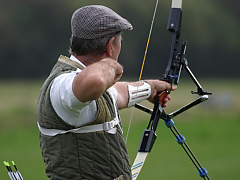 Get in touch with your inner Robin Hood on an Archery Adventure in the Overberg. Archery was originally used for warfare, but today it is a rewarding and stress-free sport that is suited for people of all ages and abilities. Archery is a wonderful way to spend the day in the great outdoors. Well suited...
Operator Contact List

Beach Horse Ride in the Overberg, South Africa. The Overberg, only about an hour's drive from Cape Town has miles and miles of unspoiled coastline, making this region the perfect place for a Beach Horse Ride. A ride along the sandy beaches near Gansbaai will put a smile on anyone’s face....
Operator Contact List 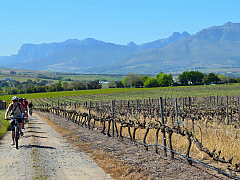 In the Overberg you can go on a Bicycle Tour along the rugged shoreline, along tracks and farm roads or up and down mountains. Ride past the ubiquitous blue crane, South Africa’s national bird as it struts its stuff on the yellow canola fields. Spot the V-shape spray of the southern right whale and...
Operator Contact List 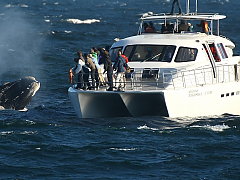 Boat Charters in Overberg - Boat Trips, Sunset Cruises, Whale Watching, and more. Overberg, with almost 3000km of coastline, is as much a feast for the...
Operator Contact List 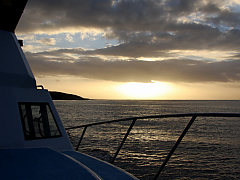 The Overberg is on of South Africa’s many scenic regions, why not enjoy this natural beauty on a Boat Trip? Take in the magnificent views of Walker Bay, watch whales in the winter months and seals all year around, end the day with a sunset cruise and celebrate with a G&T – it’s always a good...
Operator Contact List

Safely harnessed in mountaineering equipment and in the company of an experienced guide, prepare yourself for a Tarzan and Jane adventure in the Overberg! The Hottentots Holland Nature Reserve in the Elgin Valley is the home of the newest of South Africa’s Canopy Tours. Here a series of elevated platforms...
Operator Contact List 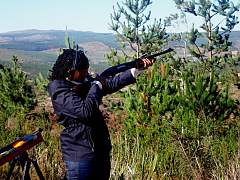 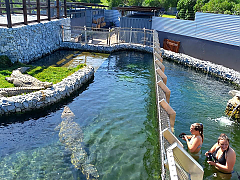 Crocodile Tours in Overberg - Adventures. Crocodile farming also plays a role in the conservation of wild crocodiles. In addition, as a result of the regulated...
Operator Contact List 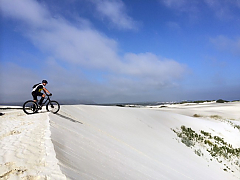 The latest craze to hit the Overberg is the Fatbike! Now, before we start giving the poor bike a low sense of self esteem, let’s just clarify: It is not the bike that is fat, it’s the tires. A Fatbike is a bicycle in every other aspect, but it has oversized and wide tires. This means that...
Operator Contact List 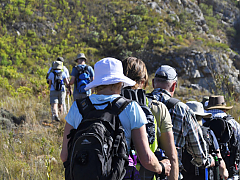 The best view of fynbos is on foot! When you hike through the mountains and valleys of the Overberg, you have time to appreciate the thousands of floral species that make up the Cape Floral Region. From the Hottentots Holland Mountains in the West, the Riviersonderend Mountains in the North to the Atlantic...
Operator Contact List 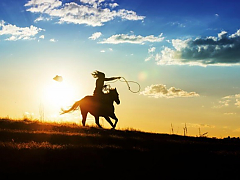 The Overberg literally means ‘over the mountain’. This area, famous for its excellent fruit growing conditions is just waiting to be explored by horse-back. So saddle up and explore this beautiful part of South Africa on a guided horse riding adventure where your experienced guide will take...
Operator Contact List

Paddle down the rivers and along the coastline of the Overberg on a Kayaking Adventure. Spot herons and blue cranes along the embankments or frolic with seals and penguins in the sea. Contact our Overberg operators for a day of Kayaking that is good for both body and soul!
Operator Contact List 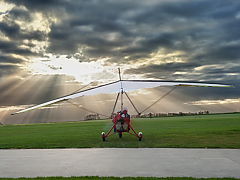 Join our Overberg operators on a Microlight Flight and experience the natural beauty of Walker Bay from above. During the winter months, you’ll see sightings of southern right whales and the rest of the year great white sharks, dolphins and other marine mammals are commonly spotted on a Microlight...
Operator Contact List 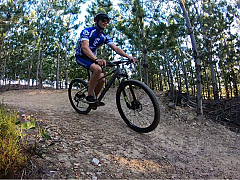 Go mountain biking through the rugged mountains of the Overberg. Stretching from the Hottentots-Holland Mountains in the west to the Breede River in the east, the Overberg is a vast adventurer’s paradise just waiting to be explored, so climb onto that bike and venture up and down dirt roads. It’s...
Operator Contact List 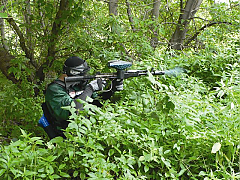 Few things are as fun as reliving your childhood games. Get that heart rate up on a Paintballing Adventure in the Overberg. Set out your strategy with your team, run through the woods, hide behind bunkers, get shot and shoot at the ‘enemy’. It’s all part of a days epic battle of Paintballing!
Operator Contact List

Quad Biking is a great opportunity to blow your hair back! These tough four wheelers are also known as All Terrain Vehicles (ATV’s). As the name suggests, they will take you just about anywhere! What better way to start your day than a Quad Biking adventure in the Overberg. Whether you are an...
Operator Contact List 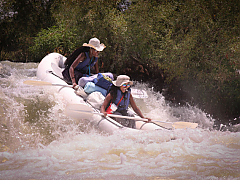 River rafting in the Overberg, South Africa. When you spot the first Blue Crane you know that you have arrived in the Overberg. During spring and summer, this majestic rather-unreal-looking large bird, that also happens to be South Africa’s national bird, struts around the rolling farm lands;...
Operator Contact List 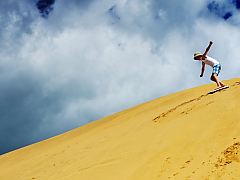 ‘I wish I didn’t have to spend time on the beach’ said no one ever! Life is more fun in boardshorts on a sandboard! So come to the Overberg and learn the latest craze. Sandboarding is similar to snowboarding, except that you glide on sand and in your shorts! Suitable for all ages and levels of...
Operator Contact List 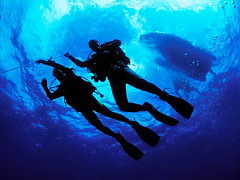 The Overberg is well known as one of the world’s premier whale watching destinations, but aside from these famous seasonal visitors there are many permanent marine creatures that can be explored on a Scuba Diving Adventure. Protected reserves along the coast boast kelp forests, sponges, corals, nudibranches,...
Operator Contact List

A Sea Kayaking Adventure in the Overberg means leaving the hustle and bustle and entering the magic world of Walker Bay. Here, in the deep blue sea you can encounter dolphins, whales and seals along your journey. So contact our Overberg operators today to swap the sounds of traffic with tranquil sounds...
Operator Contact List 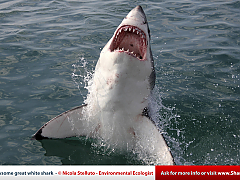 For a once-in-a-lifetime adventure, meet the legendary great white shark up close and personal in the famous Dyer Island ecosystem in Gansbaai in the Overberg. About 50 000 Cape fur seals live on the Dyer Island group. No wonder that the great white shark has also chosen to make this its home. A Shark...
Operator Contact List 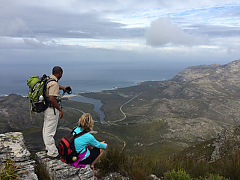 Slackpacking is a combination of a hiking adventure with some of the finer things in life, like a hearty meal, chilled wine and a comfy bed. Slackpacking on the Fynbos Trail in the Overberg is simply the best of both worlds. This area is the heart of the Cape Floral Region, famous for its pristine indigenous...
Operator Contact List

Toast the end of another African summer’s day on a Sunset Cruise in the Overberg. Walker Bay is the a perfect place to enjoy the sun setting over the Indian Ocean, so contact our Overberg operators today and join a romantic Sunset Cruise.
Operator Contact List 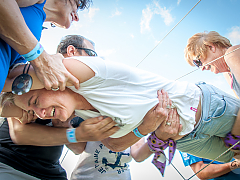 Team building in the Overberg, South Africa - Outdoor adventure activities and Company events in towns like Hermanus, Elgin and Gansbaai. Farmers settled and developed the Overberg, just a hundred years after the arrival of Jan van Riebeeck in the Cape. The innovation and sheer tenacity of the...
Operator Contact List 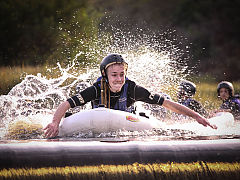 Tubing or geckoing means moving along a river on a large inflatable rubber tube. In the Overberg this means a gentle ride through the waters of the Palmiet River in the Kogelberg Biosphere Reserve. Picture yourself on a unique water adventure moving through waverways that most tourists never get to...
Operator Contact List 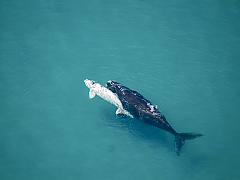 A close encounter with the ‘gentle giants’ of the sea is on top of many people’s wish list and one of the worlds centres for whale watching is the picturesque Hermanus in the Overberg region. During the winter months, southern right whales migrate to the coastal waters of South Africa. In...
Operator Contact List

Zip Line in the Overberg, South Africa. Climb into the harness, clip into the steel zip line and take a leap of faith on a Zip Line Adventure in the Overberg! Stress and everyday worries are instantly swept away as you begin to soar through the air. Zip Lining is a fast and fun activity suited to anyone...
Operator Contact List 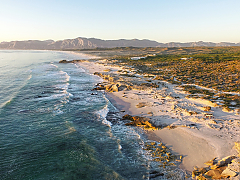 It’s time to get those wheels Dirty! Head for a 4x4 Adventure in the Overberg where you can tackle magnificent nature trails in conservancy areas of the Elgin Valley. Contact our knowledgeable operators in the Overberg today! As fellow 4x4 enthusiasts they are always keen to assist with planning your...
Operator Contact List