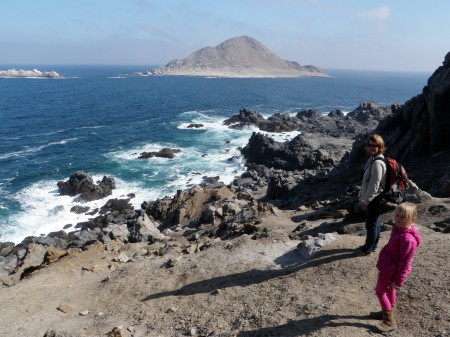 Our journey continued along Chile´s coast from Taltal through damatic coastal scenery to one of Chile´s most beautiful coastal parks - Pan de Azucar (Sugarloaf). Here is a famous little island which is the breeding ground for Humbolt penguins, seals and a variety of sea birds. It was beautiful and we camped here for a week all by ourselves. We stayed busy doing walks, making shell and buoy mobiles and clay animals. We had a lot of fun on the beach and barbecued fresh fish almost everyday.

We decided to head south and on our way saw the desert give way to beautiful wildflowers. There was a stunning display of purples, whites, pinks, yellows and blues. It has been an exceptionally wet winter so there were more flowers than normal and we were lucky to see this natural phenomenon.

It was getting greener and more lush heading towards La Serena and our spirits were high. We drove inland to the Elqui Valley. This is where they grow Chile´s famous Pisco (like brandy) and there are many farms and distilleries to visit. We spent a few days doing tastings and looking for UFO´s which get sighted quite often in the vally (we concluded that you have to drink lots of pisco to see little green men). Here we celebrated Ashley´s second birthday even with a cake decorated as a digger. There was another boy who had his birthday on the same day so we had many friends sharing cake and sweets and swimming in the pool.

After the Elqui Valley we headed for Santiago. One of the biggest cities in South America and we were very excited yet scary to have a city experience. We found a very comfortable apartment in one of the leafy upmarket suburbs, Las Condes of Santiago. Ashley was unfortunately sick for a few day and running high fevers. Luckily we could medicate him and he was soon his old self. It was Independence weekend when we arrived and we shared in the festivities at the Padre Hurtado festival where we saw real rodeo and tasted traditional cuisine. We also saw a military parade and the kids were fascinated.

Santiago´s public transport is very efficient and we used the metro (underground) and busses all the time which would take us to the various attractions and museums. We climbed Cerro San Cristobal which affords great views of the city and of the snow covered Andes. Luckily there was not much smog and our views were great.

We were invited for an asado (braai) at people we met in the Elqui Valley - Diego and Soledaad. We drank a lot of picsco sours and good Chilean wine and meat. A delicious salsa gets made with coriander leaves, onion, tomato and chili called pevre and you dip your empanadas or bread. Yummy!  Again we were spoiled by enjoying supper at Jaime and Patricias house in the hills of Santiago (we met them in the Atacama desert) and they also advised us on what to see in the south of Chile. We ate a traditional dish called Pastel de choclo which is a creamy corn dish - finger licking good.

We also did a day trip to the Maipu Valley which is one of the country´s largest wine producing areas in close proximity to Santiago. Here we visited the largest wine farm in Chile named Cocho y Toro. The wine was great but the service was dissapointing. Maybe too many tourists and little patience from the staff.

Heading south yet again, this time heading for the Andes again and onto Parque Nacional Altos de Lircay where we wanted to camp for a few nights. There was still a lot of snow on the surface and we had to shuffle a road free of snow before arriving at the campsite. The kids had a great time playing in the snow and we had a natural refrigerator - the snow. Here we did many walks through the forests and there are so many varieties of tree species including the roble, beech woods and pines. Again we were the only people camping!

After this snowy experience, we headed for the Termas de Chillan where we wanted to soak our cold bodies. Situated right in the middles of the Valle Nevada ski resort - good pistes and fresh snow. The thermals were great and the kids had fun throwing snowballs into the warm water.

From Chillan we headed for a campo south of Los Angeles, owned by Isabel and Gonzalo (friends of Jaime and Patricia) and we were spoilt rotten. Words cannot describe this farm. From the old homestead and its cottage style decorations, beautiful grounds with flowering camelias with tennis court, swimming pool, chickens, sheep, geese, reindeer and more. Emma-Joy enjoyed horse riding everyday and was on her own horse galloping away! Awesome! There were a few other kids so they had a great time playing.

We spent a few day in a cabin the lakeshore outside Coñaripe with the perfect backdrop - one of Chile´s most active volcano Vulcan Villarica. A 2847m high snowcovered cone, rumbling and forever smoking spewing lava and ash on a daily basis. Here with did fishing, rowing and enjoying some aguas caliente (hot water) in the nearby thermal hot springs.

Finally we headed for the Argentinian border via the car and passenger ferry from Port Fuy on Lago Pirihueico. It is a 1 1/2 hour ferry ride with awe-inspiring scenery, lush forest and lots of water. It was very dramatic and one of the most beautiful sights to see. Our border crossing was troublefree and we continued through the Lanin National Park to the quiant mountain village of San Martin de los Andes situated on a lake. It has a very Austrian look and feel, all the building are from wood and stone. It is the starting point of the famous 7 lakes drive to Bariloche.