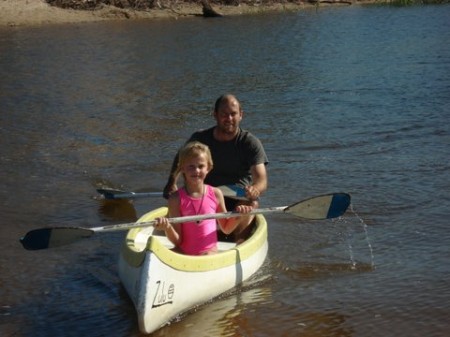 Three challenges lay ahead as we boarded our Air Malaysia flight to Buenos Aires at 9am on 6th July 2011. First - saying goodbye to everyone at home and at the airport, second - spending 9 hours on a flight with a 2 and 5 year old and third - spending 9 hours on a flight with a 2 year old. Well indeed, the air hostesses gave a welcome sigh of relieve as we disembarked in BA with sweaty armpits stains as they waved us Adios.

Buenos Aires is certainly a vibrant yet romantic city and our first night was a great experience in this bustling city. We did however have to deal with a 5 hour time difference which made us really tired and jetlagged. Emma-Joy woke at 2:30 the following morning thinking it is 7:30am at home in SA. We got into the swing of things and took a bus to Tandil, situated 5 hours south east of BA where our friend Joubert has an amigo by the name of Diego. We were warmly received by Diego and his wife Paola and they organised an apartment for us to stay in for a few days since we were going to buy a car in Tandil.  Well, it took much longer and we ended up staying for 3 weeks. We did meet so many wonderful people especially on Independence day we bumped into Miguel, Francesco and many more in the Catholic Church in downtown Tandil. They introduced us to Antonio and his wife Francesca who are orginally from Italy. They all assisted us with being translators with the car paperwork etc. There are more than 60% Italians living in Argentina, so there is a very big Italian influence on their food eg. pizza, pasta and much more.

Right, buying a car in Argentina is a long, drawn out process and here manaña definitely means tommorrow. Keeping in mind that it is siesta from 12:30 till around 16:00 each day - everything closes and comes back to life in the evening until around 8pm. Dinner is around 10pm and most go to bed around 12pm or 1 am including kids. We finally found a car we liked, a gold Chevrolet Meriva. It took a week to purchase it since the dealership did not take credit cards. We had to draw cash from the atm each day and get a money transfer from western union. The the paperwork for the sale took another week. Johan had to get a temporary resident number which also took a few days. Finally we could take the car but not out of the Buenos Aires province as it was not registered yet. This took another 10 days.

In the meantime, Jenny was taking tango classes and was also getting the hang of the spanish lingo. We were amazed by the Argentinian hospitality and they have very strong family values. Diego and Paola invited us to their son Valentine´s first birthday party which turned out to be a traditional asado (braai). The meat gets tied onto iron rods and placed next to the fire where it gets grilled for hours. We ate so much and got to bed really late. Argentina has a few delicacies which we discovered - alfajores are biscuits filled with another delicacy called dulce de leche (sweet milk). Basically cooked condensmilk and you can buy it is all sizes - small to super large tubs.  Another custom is matè which is a strong tea which you have in a carved out mug or cup and you sip it through a filter straw (bombilla). This you can have anytime of day and is a social process where everyone shares the same cup. Argentina also boasts with the best beef and there are lots of it.

Their wines are spectacular and they have with the best Malbec in the world.

It was time for Emma-Joy´s birthday and we decided to have a surprise birthday party for her at our apartment. We met a few kids in the block (Carlito, his sister and her friend as well as Miguel´s daughter Michaela) and they joined us for the party, even doing a tinkerbell dance show. Emma-Joy had a dulce de leche cake and lots of sweeties. It was great and we sang Happy Birthday in Spanish.

We were then invited to go the Diego´s in-laws campo (farm) around 50kms out of Tandil. Here Emma-Joy enjoyed horse riding so much and she kept going faster calling out to the horse - rapido rapido (faster faster). Ashley loved the quadbike and sat on it all morning. It was really freezing and rarely reaching 10 degrees celcius during the day. We continued onto Mar de Plata, the second largest city in the BA province. It is like Durban but with a really cold sea. During the December holidays, the beaches are packed and you can rent a tent on the beach for the season at a cost. We took Emma-Joy to the Aquarium for her real birthday and the highlight was certainly the Dolphin show. Even Ashley sat quietly for a half an hour. It was truly a special treat. We then carried on along the coast to Miramar and stayed next to the ocean for 3 nights in a quiet tourist complex. We were the only tourists as it is also winter here. We enjoyed the breakfast here, consisting of medialunas (miniature croissants) with cream cheese and wait for it… dulce de leche. Here we explored the surrounding pine forests and spotted our first hummingbird. What a great sighting for our life list. Our bird list so far stands at 53 and all new species.  We then drove further south to Necochea which is not a great town, but the South American fur seal was a highlight as there was a whole colony of them at the harbour.

We returned to Tandil and finally received our registration papers. We decided there and then to start our journey north to Chile. We reached San Rafael in a few days which is in the Mendoza province famous for their wines and lots of olive and fruit orchards. Similar to our winelands region in Cape town. We happen to stumble upon a wine farm called Bodega Labiona which is now run by the son and daughter and they produce a great cabernet sauvignon and malbec. They also produce olive oil on their neighbouring farms. The Vallee Grande is also a beautiful area with spectacular scenery of the canyon and a large dam with hydroelectricity plant. Here we did lots of hiks and relaxing.

Then onto Las Lenas which is a popular ski village deep in the heart of the Andes Mountains. The village itself was fully booked so we stayed in a nearby hotsprings resort called Los Molles. The snow was fantastic and skiing spectacular. This resort boasts with over 60km of ski and chair lifts and have a large variety of pistes ranging from green to off piste black. There is also an 8km long slope. Jenny had 3 full days of skiing and was really enjoying it, even going on red and blue slopes.

We returned to San Rafael where we are now trying to pay for our car license… the saga continues. Hoping to get to the north of Argentina in the next week or so. Will keep you updated.